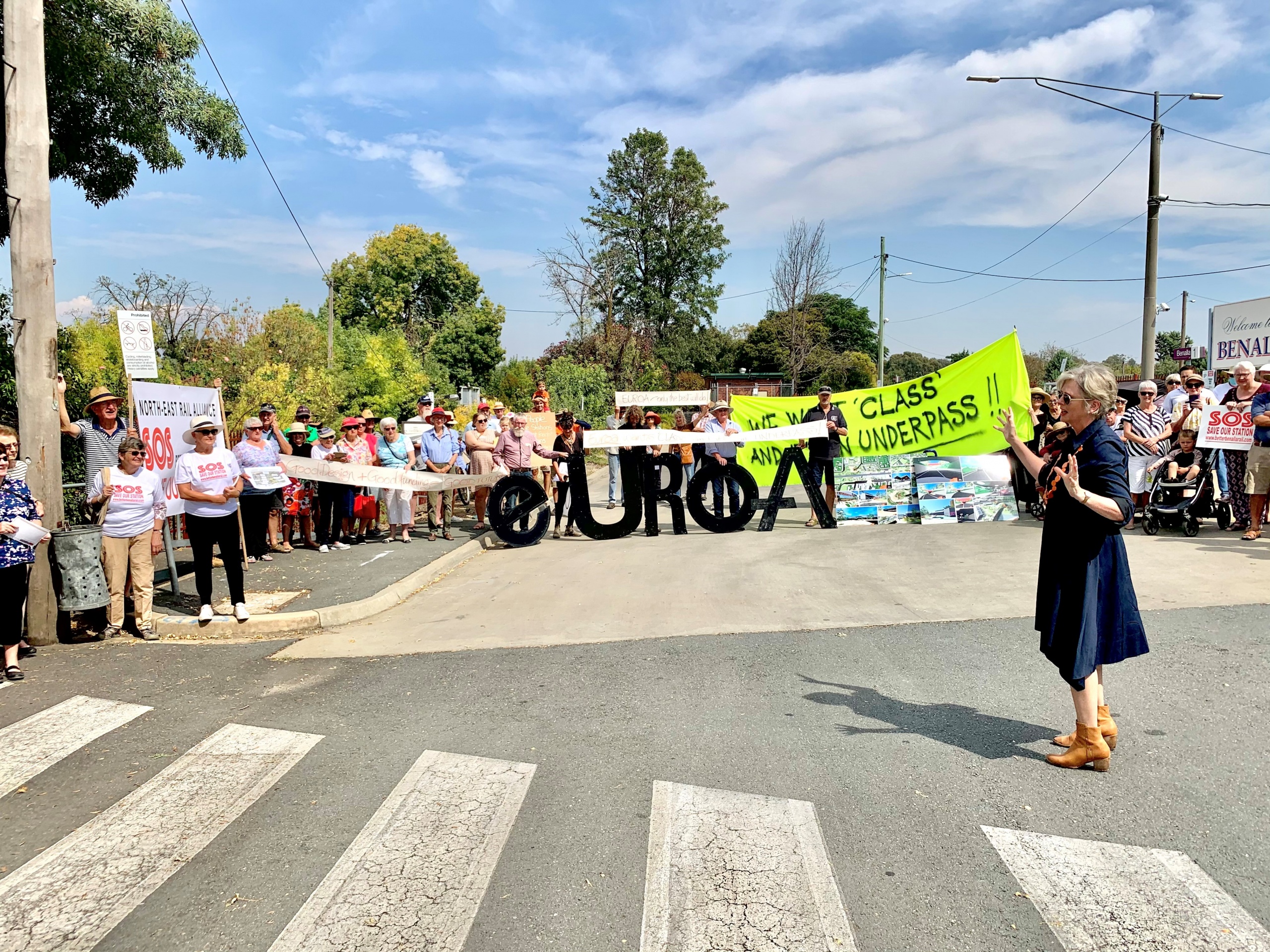 North East Victoria has suffered for too long with a second-rate rail line. Decades of under-investment in the North East Line by successive Governments has left us with a service that does not meet the needs of a modern regional community.

Recently, the Government completed a $235 million upgrade to the rail line which was a good start, but that upgrade was about fixing potholes and ballast just to maintain our basic passenger service. We now need Government to set out a plan to roll out fast, efficient rail services, that connects us to the rest of the Victorian rail network, and which delivers high-quality railway stations for all our towns along the railway line.

Our region has so much potential, but to unlock that potential, we need to be connected properly to Melbourne and to the rest of Victoria and Australia with a 21st century rail line.

For too long, the North East Line has delivered a sub-par rail service. For years, people have had to deal with constantly cancelled services and unacceptably slow travel speeds. The recently-completed $235 million upgrade to the line should deliver a more reliable rail service. But this upgrade will simply help us see more punctual and reliable services. It will not deliver more frequent train services and it will not deliver faster travel times.

The Victorian Government has also refused to deliver more frequent services on the North East Line. Right now, there are only five daily rail services on the North East Line. If you miss the 6:35am train out of Wodonga, the next train isn’t until nearly 1pm. If you miss the 5:20pm train out of Albury-Wodonga, you’re stranded until the next day. This is not a service that people can rely on to work, study, see family, or get to medical appointments.

Before the last election, the Government committed $8 million for a business case into fast rail to Wodonga and said it would issue that business case by the end of 2021. But they’ve now declared they won’t deliver that business case until after the next election, and they seem to have lost interest in delivering faster rail services to Wodonga. Right now it takes 4 hours to catch the train from Wodonga to Melbourne. Overseas, trains can travel at speeds of up 250 km/hr. If we hit those speeds, you could get to Melbourne in 90 minutes from Wodonga, and under an hour from Benalla. That would be transformational for our region. And yet the Government seems to have quietly dropped its business case.

And neither the Victorian nor the Federal Governments have committed to increased maintenance funding for the North East Line. But we know that in order to keep the rail line at peak performance, we need an additional $5-$10 million of maintenance funding per year.
I am fighting to fix these issues and secure a city-quality rail service for Indi:

The Government’s Inland Rail project is causing big disruptions to many of our rail communities in Indi. In order to allow taller, double-stacked freight trains to run along the North East Line, the Government-owned Australian Rail Track Corporation (ARTC) is demolishing existing rail infrastructure including road bridges and pedestrian overpasses, in Wangaratta, Glenrowan, Benalla and Euroa.

In Benalla, the community mobilised to push for their own design: the demolition of the much-disliked road overpass, the re-alignment of the rail track, and redevelopment of the whole rail precinct. In Euroa, the community called for a road underpass, to finally reconnect the two sides of the Euroa that have been separated by the road bridge.

I believe that the Inland Rail itself will be a positive development for our communities, connecting us with increased export opportunities. But in the process, we cannot simply allow the ARTC to destroy the amenity of our towns. They need to deliver quality rail precinct upgrades that meet the aspirations of our communities. I’ve been persistent in making the case to Government that they have to deliver community-backed options for Benalla and Euroa. They cannot simply come into our community and force things onto us.

When I first started meeting with the ARTC over two years ago, they told me their road bridge proposal for Benalla was a done deal, and the community proposal would be too expensive and could never happen. But our community campaign in Benalla won. And in Euroa, we are about to find out the final design.

But the campaign is not over.

• In Benalla, I will fight the community’s concerns to be incorporated into the detailed design of the new station focussed on amenity, safety, and connectivity. And I will fight for $2 million for Benalla to do beautification works in the streets around the rail precinct.

• In Euroa, I will fight for the community’s voice to be reflected in the ARTC’s recommendation on a design option for the town. And I will work to secure $100,000 funding for the Euroa Station Precinct Design project to create a plan to beautify the new station precinct.

• In Glenrowan, I will fight for a design that protects our nationally-significant Ned Kelly heritage sites, and which retains the important connections between the two sides of the town.

• In Wangaratta, I will fight for the community’s concerns about the safety and accessibility of the proposed underpass to be incorporated into the final design of the precinct.

The Victorian and Commonwealth Governments are pumping billions of dollars into new rail projects for Melbourne – the Melbourne Metro tunnel under the city and a new rail line to Melbourne Airport.

As part of those projects, they are redeveloping Sunshine Station as the key rail interchange in the state. Regional passengers will access the Airport Train and the Melbourne Metro tunnel through Sunshine Station. But trains from the North East will be excluded from these projects.

Right now, trains from the North East pass through Sunshine Station but cannot stop there. That’s because our trains run on standard gauge lines, and the rest of the state runs on broad gauge lines. And the Victorian Government has cut us out of their redevelopment plans for Sunshine Station.

If trains from the North East line are unable to stop there, it would mean passengers would need to travel all the way into Southern Cross station to take advantage of the Airport Rail Link and the Melbourne Metro, substantially increasing travel times. The airport rail link has been on the table for so long, it would be a disgrace if it finally became a reality but people from Wodonga, Wangaratta, Benalla and all the towns along our line missed out.

The State and Federal Governments are spending tens of billions on new rail infrastructure for Melbourne, the least they could is make sure people from North East Victoria can access some of those benefits. I am pushing for a standard gauge platform to the built at Sunshine Station so people from the North East get the same rail services as all other Victorians.

Haines puts pressure on the ARTC after missed Euroa deadline