I always put Indi first. I also support debate. And I believe all MPs have a responsibility to bring constructive ideas to Parliament.

I’m committed to being fully transparent about my voting record.

It’s a privilege to represent the people of Indi in Parliament, and I work hard to ensure our voice isrepresented every time I step into the chamber.

As an Independent, every vote is a conscience vote.

I review each bill on its merits, and work with all sides of politics to get the best outcomes for Indi.

The government has passed over 370 new laws since I was elected to Parliament.

I’ve supported over 90 per cent of government bills.

Whether it’s more funding for our regional universities or rolling out COVID-19 disaster payments, I’m always pleased to support the government pass new laws when they’re good for Indi.

As an independent, I’ve also got the power to oppose new laws when they don’t work for Indi.

I’ve opposed proposals like the expansion of the cashless welfare card, rolling back responsible lending laws, making political donations to the major parties more secretive, banning mobile phones in immigration detention, spending billions on fossil fuel subsidies that slow down the regional renewables boom, and watering down the Family Court and supports for families and children.

While I’m free to cross the floor, Government MPs usually have no choice but to toe the party line.

I’m proud of my voting record

I’ve attended a total of 796 votes since entering Parliament.

Parliament doesn’t just vote on new laws. It’s also votes on whether to take a position on certain issues like whether the vaccine rollout is moving along fast enough, and procedural questions like whether a specific MP should be allowed to speak.

I’ve attended 285 votes on bills, amendments and other motions which ask the Parliament to take aposition on a certain political issue.

I make these decisions on a case-by-case basis, depending onwhat’s best for Indi.

These types of votes represent around 36% of all the votes I’ve attended in Parliament.

I’ve attended 342 votes on whether an MP should be allowed to speak or not.

The free and open exchange of ideas is crucial to a well-functioning democracy. All too often, the Government shuts down debate and forces MPs to stop speaking on the floor of Parliament simply because it doesn’t agree with what they’re saying.

I will almost always oppose these motions. The only time I’ll support one is if I believe the MP is being too disruptive or disrespecting the Parliament.

These types of votes represent around 43% of all the votes I’ve attended in Parliament. 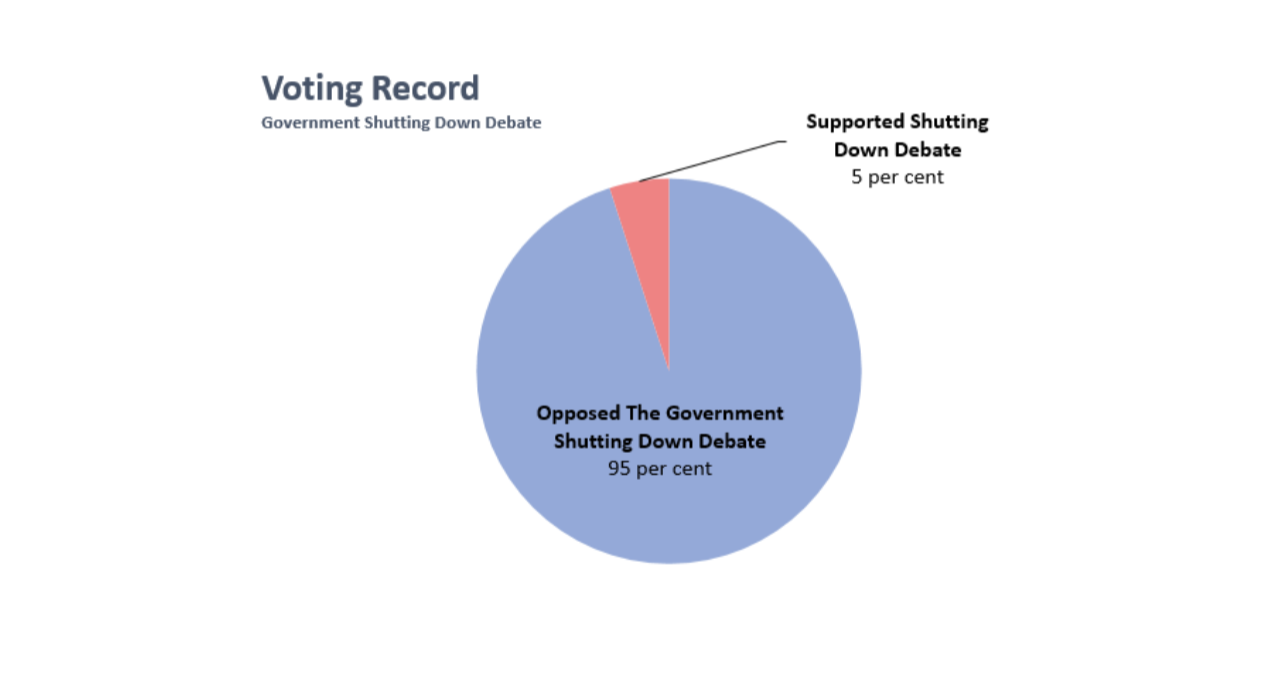 I’ve attended 169 votes related to general procedure. These decide matters like what should be on the schedule for debate, or when Parliament should adjourn for the day. They’re rarely political.

I make these decisions on a case-by-case basis, depending on what I believe would allow constructive ideas and arguments to be debated in the Parliament.

These types of votes represent around 21% of all the votes I’ve attended in Parliament.