At the end of a speech to the National Press Club in Canberra on November 14, Stuart Robert – the Minister for the National Disability Insurance Scheme and Government Services – took questions from the media, as is the usual practice.

One was from ABC journalist Stephanie Dalzell. She asked the Minister to revisit her Freedom of Information (FOI) request for specific details of NDIS plan delivery waiting times because she had earlier received a heavily-redacted 49-page document in response – rendering it useless.

The Minister told the audience and Ms Dalzell that the redacted information was not the result of departmental obfuscation but poor wording in her FOI application. Standing at the lectern, he then opened a copy of the most recent NDIS quarterly report. It contained what he termed a special “Stephanie annex(ure)” and assured Ms Dalzell that it had “every bit of data you could possibly want”.

But did it really include the information that Ms Dalzell had originally sought?

NDIS waiting times are important not only to journalists seeking information in the public interest, but to many Australians with disabilities, including constituents who regularly contact my office to seek answers to their desperate situations while they wait for NDIS support.

This is not high security information that needs to be hidden from the public. This is basic information about the operation of an essential government agency that is supposed to be helping – with public money – the most vulnerable people in our communities. It is our right to know how this agency and its scheme are performing, and where the gaps exist that need to be closed.

As I prepare to return to Federal Parliament for the last two sitting weeks of 2019, I expect the Parliamentary Joint Committee on Intelligence and Security  will shortly table its report of inquiry into the impact of law enforcement and intelligence powers on press freedom.

This is the first of two inquiries examining press freedom and our current security laws. The second – by the Senate Environment and Communications References Committee – has similar terms of reference. It is scheduled to report in March 2020.

I hope the findings of both inquiries give due regard to the significant role that investigative journalism, whistle-blowers and the public interest play in protecting Australia’s national interest.

Investigative journalism and whistle-blowing have led to royal commissions into aged care, detention and protection of children in the Northern Territory, and banking, among others. I have a keen interest in these examinations because the capacity of our media to seek the truth is crucial to trust and transparency in our democracy.

It concerns me that Democracy 2025, the most recent study by the Museum of Australian Democracy and University of Canberra of our democracy’s performance, shows that our trust in vital institutions is steadily eroding. Media freedom is one of the ways – outside government – that enables us to hold parliamentarians and public officials to account. It is important to the people I represent.

We need to trust that when we seek such information we can do so. So does a responsible journalist – whose work can so often advance public scrutiny and inform debate.

On October 21, media organisations across the country united in a campaign called ‘Your right to know’. Publishers and broadcasters called on the government to reform the Freedom of Information Act and legislate a journalist’s or publisher’s right to contest search warrants.

They also seek limits on information the government can deem ‘secret’, an expansion of protections for whistle-blowers, and exemptions to protect journalists from prosecution under new national security laws – which have increased in number since 2001.

Curbing such freedoms – intentional or consequential – diminishes public trust in government. It also ultimately erodes the very democracy we seek to safeguard – where whistle-blowers are protected and journalists can investigate and report government and public service misconduct. A vital, robust and free society can maintain both its national security and a strong, public interest media.

Yet while Commonwealth criminal law defines as ‘secret’ any information that is ‘inherently harmful’ to Australia’s interests or ‘likely to harm’ those interests, ‘likely to harm’ is not defined – leaving it open for government to decide the basis for prosecuting any breach.

The law also includes a public interest defence – where a journalist publishes information reasonably believed to be in the public interest. This is what’s at the heart of media organisations’ current ‘Right to know’ campaign. But the existing definitions of ‘journalist’, ‘reasonable belief’ and ‘public interest’ remain unclear.

The pursuit of truth brings with it a heavy responsibility. I acknowledge the important need for robust national security laws, yet I agree with a man who knows only too well the high price a journalist can pay. Professor Peter Greste believes the government can legislate a Media Freedom Act that would both respect and protect our national security needs and a journalist’s right to investigate and report government and public service misconduct.

So, I look to the Intelligence and Security Committee’s inquiry report to recommend legislation that enshrines positive public interest protection for journalists and whistle-blowers. As an Independent parliamentarian I will be looking, too, for Ms Dalzell’s media report on the NDIS with all the information she sought from the Minister. She needs to be able to tell the story that means so much to the constituents I represent who endure long and frustrating waiting times for their NDIS support.

Published in The Border Mail, The Canberra Times and Australian Community Media newsapers on November 25, 2o19 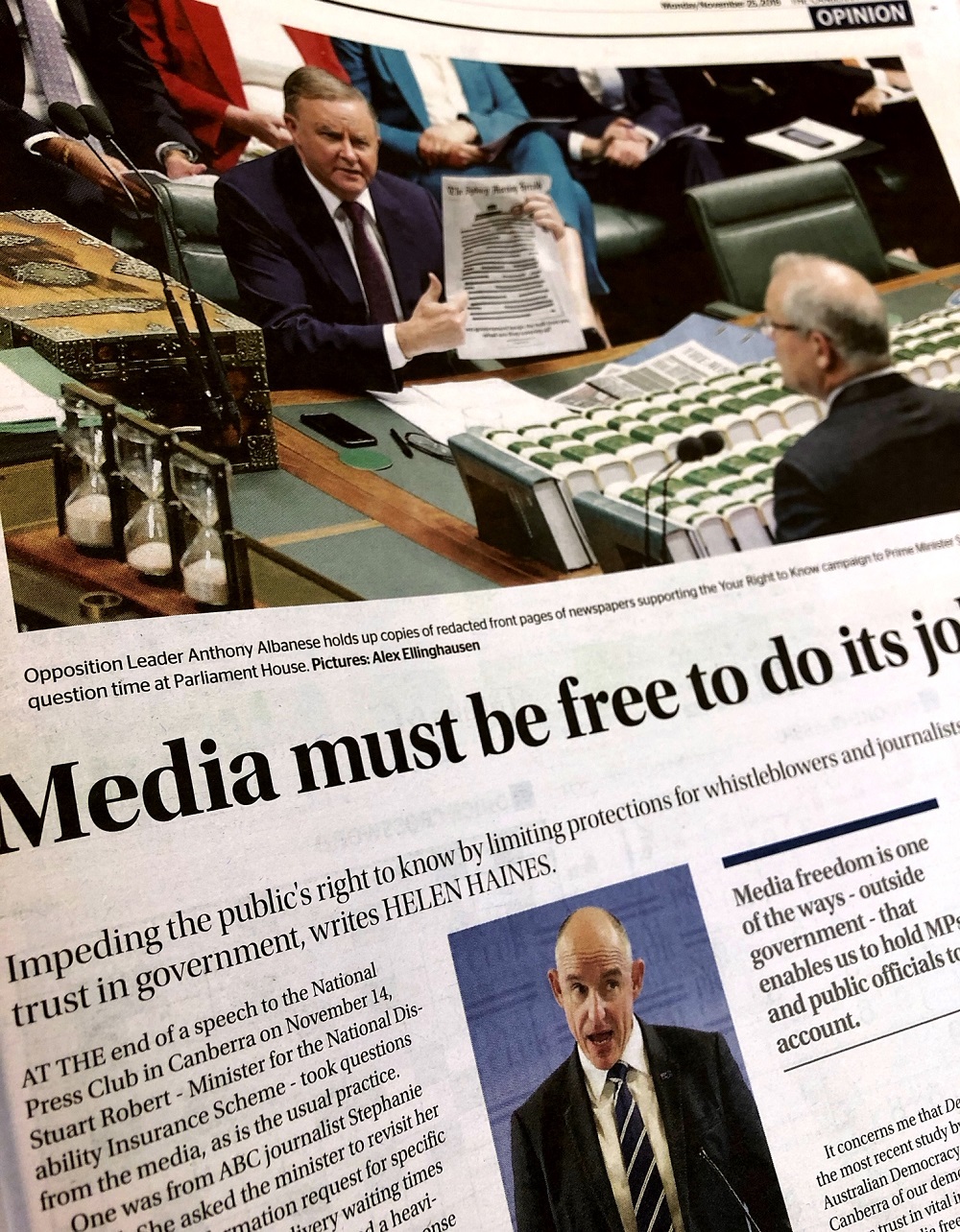 Transparency anything but clear