My response to a matter of public importance moved by Andrew Wilkie MP, Member for Clark: ‘The Government’s disregard for the rule of law, sovereignty and a healthy democracy’.

I’m very pleased to speak to this motion. I plan to speak on the aspect of a healthy democracy. Sometimes we see in the present echoes of the past. Nowhere is this clearer than when we think about the perilous state of our democracy.

In 1853 in Beechworth, at the height of the Ovens Valley gold rush, a young gold-digger named William Guest was shot by police. Guest was an innocent man; his death the result of a flagrant misuse of police power by an inept assistant gold commissioner, Edwin Meyer.

At two subsequent inquests, local police and government officials suppressed key evidence to cover up their own mismanagement and corruption. In response, the gold-diggers of Beechworth called for an independent inquiry into the circumstances of William Guest’s shooting and into the conduct of the local officials, specifying that the inquiry should be conducted by parties wholly unconnected with those responsible for the shooting, the gold commission and the police.

When the government made it clear that it would hold a closed inquiry from which the press were to be barred and which would be run by the head of the department about which the diggers were complaining, the diggers realised that they would not receive a fair trial. The diggers refused to accept that their government, to which they paid gold licence fees but for which they could not vote, could respond to serious breaches of public trust by conducting sham inquiries into itself. As their leader, Dr John Owens, said: ‘We pay our licence fee month after month trusting to the integrity of the government. Bred to respect the law, we expect to be secured the upright and efficient administration of the law.’

The Beechworth diggers then decided to do something which had not yet been done on any other goldfield in Australia: they decided to petition the parliament for the right to vote.

Today, when we look at the 1853 Beechworth petition, we can see embodied in it some timeless values. It’s a call for a full and fair franchise for people of all backgrounds and races. This spoke to accountability. It’s a call to replace the gold licence tax with a universal tax applied to all as a civic duty. This spoke to fairness. It’s a call to dismantle the broken and corrupt system of gold commissioners. This spoke to integrity. These key tenants of the Beechworth petition, accountability, fairness and integrity, now are the fundamentals of our democracy. Their calls were heeded. Change was possible.

All those years ago, Dr Owens asked the people of Australia: ‘Do you know what representation means? Of course you do. It means that, if those who, by wealth or station or authority, are placed over you do wrong, you have the power of compelling them to do right.’ This story, documented by local historian Jacqui Durrant, is one which has dark echoes 167 years after it unfolded, because we gather today in a time when people once again have lost faith in their government, when people are calling for reform and where attempts to silence those calls will not be accepted.

Last week the community of Indi gathered once more on the site of the original 1853 Beechworth petition to launch another petition calling for another great reform in our democracy. This new petition called on the government to introduce a federal integrity commission to excise corruption from our democracy and restore integrity to our politics. We did this because our democracy is straining and because people are ceasing to believe in the ability of politics to improve their lives.

When the government releases its bill, I will assess it against these five Beechworth Principles. If it meets them, I will give it my full support. If not, I will introduce amendments to ensure that it does. So The Beechworth Principles stand not as an ultimatum but an invitation to walk with Australians towards an ever more perfect democracy. 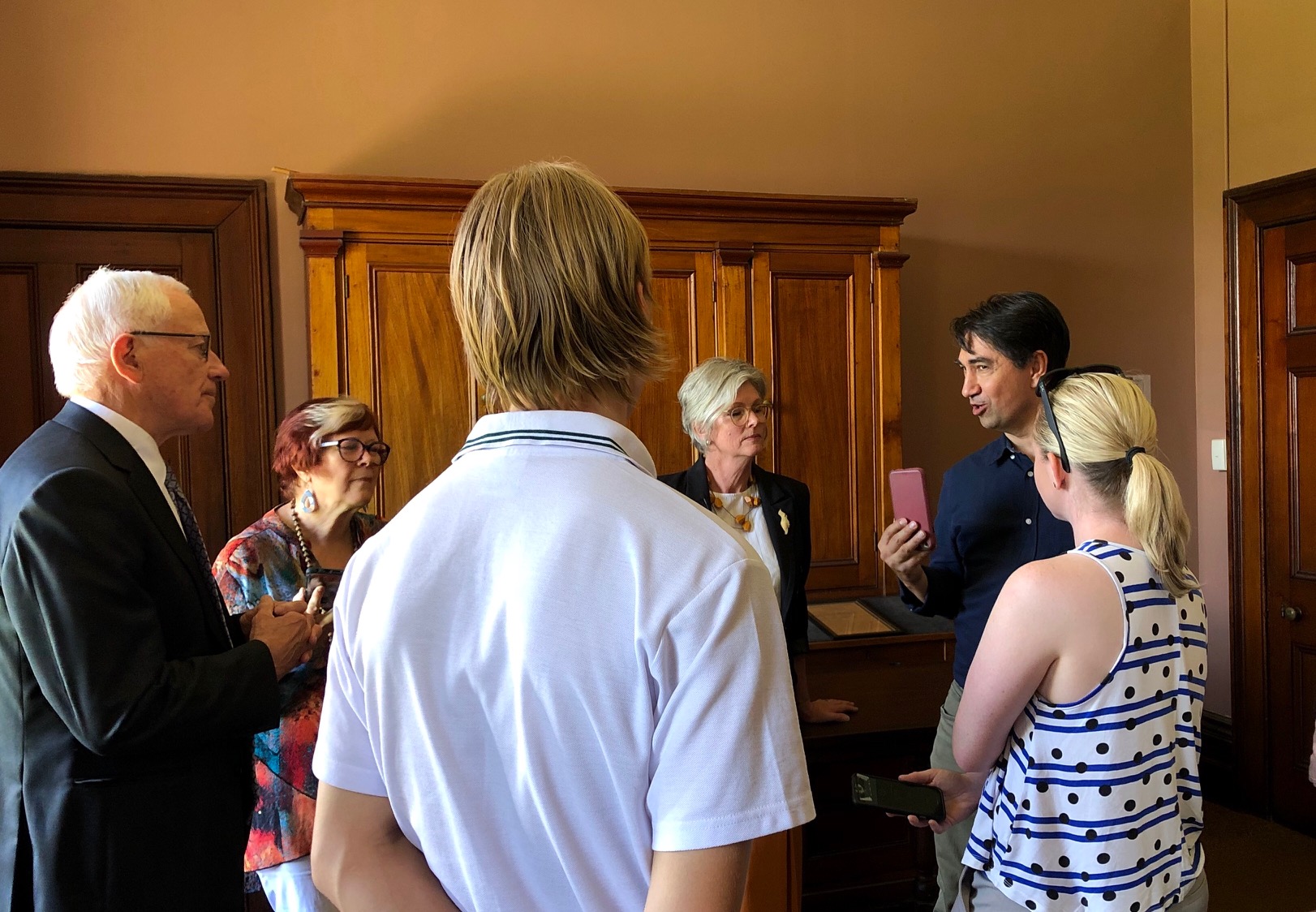 TOWARDS INTEGRITY: The Honourable David Harper AM, former judge of the Victorian Court of Appeal (left), with Beechworth Secondary College vice-captain Indigo Walke Stelling, Helen Haines MP and media representatives in Beechworth court house judge’s chambers after the launch on the Beechworth Principles on February 18, 2020.