One year on – doing politics differently 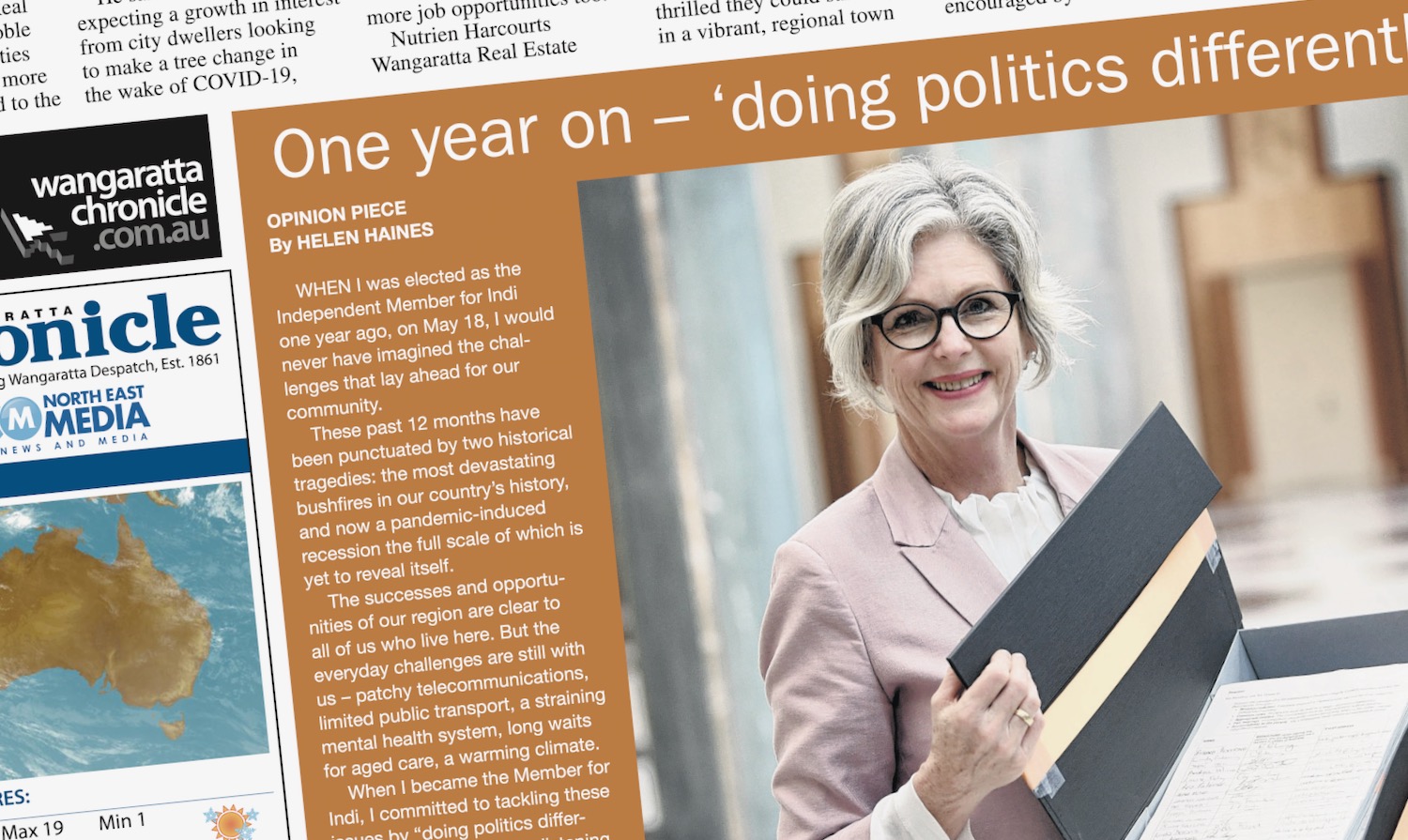 When I was elected as the Independent Member for Indi one year ago, on May 18, I would never have imagined the challenges that lay ahead for our community.

These past 12 months have been punctuated by two historical tragedies: the most devastating bushfires in our country’s history, and now a pandemic-induced recession the full scale of which is yet to reveal itself.

The successes and opportunities of our region are clear to all of us who live here. But the everyday challenges are still with us – patchy telecommunications, limited public transport, a straining mental health system, long waits for aged care, a warming climate.

When I became the Member for Indi, I committed to tackling these issues by “doing politics differently”. To me, this means listening carefully to community, delivering on promises, and being decent, honest and transparent about the decisions I am making as your representative.

Today, at the one year mark, I’d like to report back on how I’m trying to live out this commitment.

One of my first acts as an MP was to commission research from the Parliamentary Budget Office that detailed each of the 17 election commitments the Government made to Indi in the 2019 election campaign, totalling $119 million. I was alarmed to find that over half of this wasn’t slated to flow until after the next election.

Since then, I’ve been holding the Government to account on the delivery of each of those promises, and so far about a quarter of the total funding has now been delivered to worthy projects.

In January, I was thrilled to secure agreement from the Health Minister to bring forward $2.5 million for a specialist health unit at Albury-Wodonga Health to be delivered this year, not in 2022-23 as the Government had planned.

But the other $12 million promised for a specialist mental health unit is still not scheduled to start until 2022 and won’t be completed until 2025. When this promise was made, I don’t think people expected it to be delivered halfway through the next decade.

And the Government has made more promises to Indi since then. It was on January 6 that the Government first announced it would deliver $2 billion in funding for bushfire communities.

But that was five months ago. So far, only around $12.5 million of this bushfire funding has been delivered to Indi, despite incurring hundreds of millions in economic damage from the fires.

Some people have seen no support at all. Many businesses drastically impacted by the summer shut down of tourism, in places such as Indigo and Mansfield shires, still haven’t been approved even to apply for small business grants. I am determined to ensure they are not left behind.

But I made promises to you too, and I am working hard to ensure I keep them.

I promised to support local renewable energy and now we’ve now got project proposals for a micro-grid in Corryong, a community battery in Yackandandah, and I’m confident we’ll secure that funding soon. Last week I also launched a plan to accelerate renewables across regional Australia and later this year, will take that plan to Government.

I promised to ensure the $235 million upgrade to the train line is delivered on time and is up to spec. I’m now working to get a guarantee of ongoing maintenance funding to ensure it stays at this new, higher standard.

I promised to keep pushing for better mobile phone coverage and this month Indi had another huge win with six new base stations announced, almost half of the Victorian total.

Third, I’m working every day to represent and advocate for Indi.

Right now, I’m working with Government Ministers on a suite of projects that have come straight from the Indi community like support for grape-growers affected by smoke taint, childcare funding reform for regional childcare providers, and guaranteed funding for our regional universities in Albury-Wodonga.

And these community-led campaigns deliver results. For some months, I’ve been working closely with the softwood timber industry, to protect forestry jobs in the wake of the bushfires.

Just last week, the Government came to the table with $15 million. It won’t solve all the problems, but for hundreds of forestry workers in towns like Myrtleford, Wangaratta, Benalla and Upper Murray communities, it’s a possible lifeline.

There is still so much more to do. The bushfire recovery has just begun. The pandemic is still upon us. And recession looms.

Now more than ever we need belief in regional Australia. We need less of the combative, destructive politics we have known, and more listening, more delivery, more integrity.

The world is different than it was a year ago, but my commitment to you is the same: to work every day for you, and for a different and better politics.

First published in the Wangaratta Chronicle