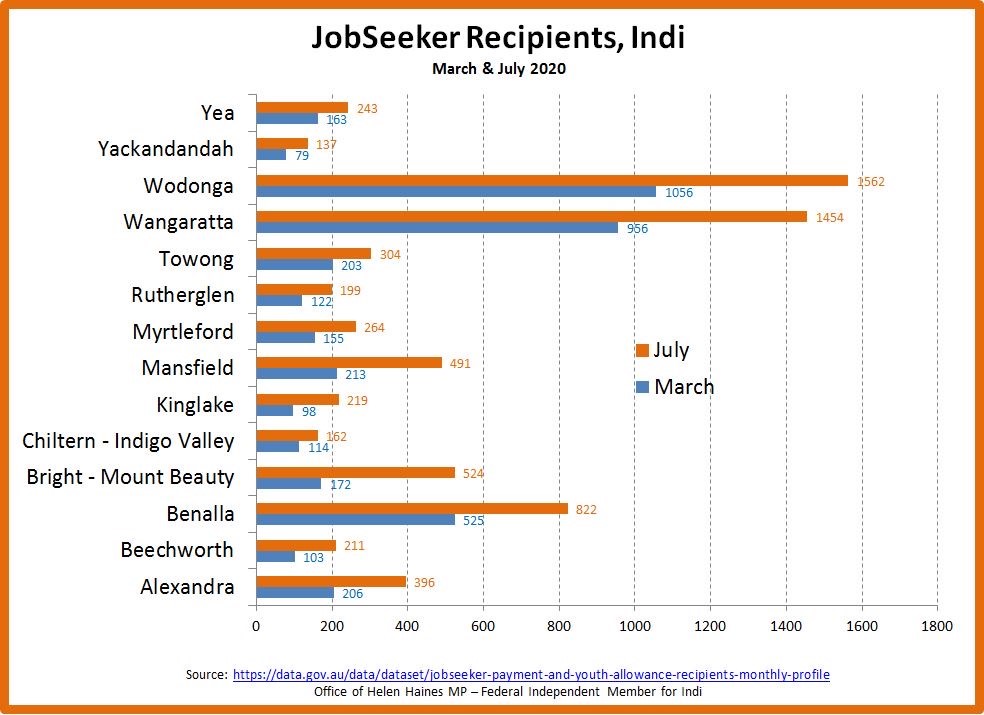 Helen Haines has again called on the federal government to invest in shovel-ready projects in Victoria’s North East to support economic and community recovery from the impacts of bushfire, COVID-19 and border closure.

The Independent Federal Member for Indi said Department of Social Services’ data released yesterday showed almost 7000 people in Indi were relying on JobSeeker and another 900 on the Youth Allowance.

“The human cost of the cumulative effects of this year’s events in our communities is heartbreaking,” Dr Haines said.

“Thousands of people have found themselves without a job for the first time in their lives because of these impacts on business and tourism.

“Since March, the number of people in Indi receiving JobSeeker has increased 68 per cent and the number receiving Youth Allowance is up 88pc.

“Naturally, Wodonga and Wangaratta, our largest population centres, have the highest number of JobSeeker recipients.

“But our smaller towns are feeling the cost.

“In Bright and Mount Beauty, 172 people were relying on JobSeeker in March, while in July that number had almost tripled to 524.

“In Kinglake and Mansfield the number of JobSeeker recipients doubled in the same four-month timeframe.”

Dr Haines said the latest statistics bolstered her calls on the federal government to invest $750 million in an economic recovery plan for the region.

“Last month I put forward a plan with dozens of shovel-ready projects across the North East that would create jobs instantly and sustain our economy into the future,” she said.

“The data today is a bleak reminder that in the upcoming Budget, the government must come to the table and invest in Indi.”

The Social Services data can be seen at: