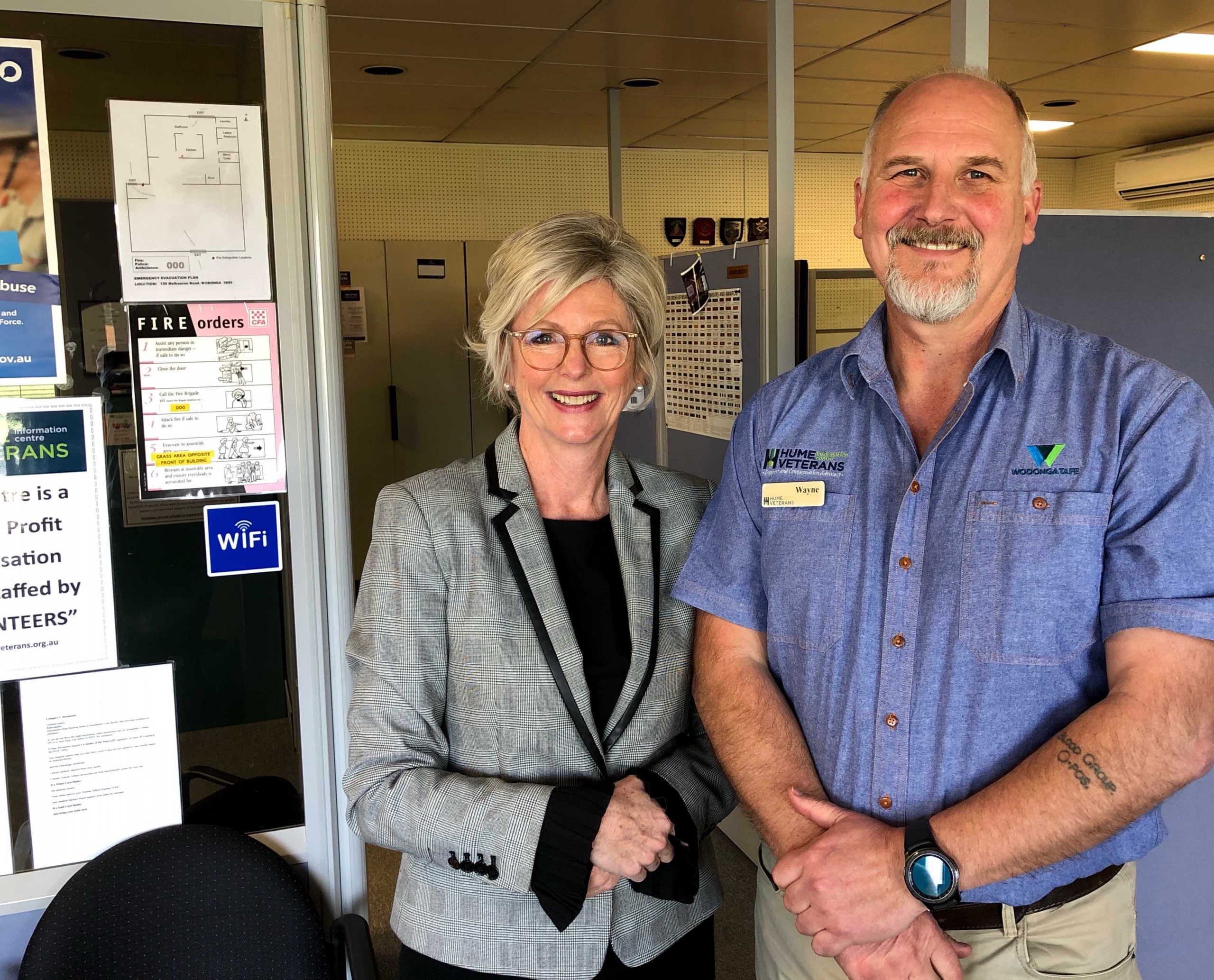 You don’t have to look far in Indi to find strong communities of veterans and their families, from lively returned-services clubs in Mansfield, Myrtleford, Alexandra and Yea, to name just a few, to veteran welfare and support centres, community fishing groups and even one of the largest and most-diversified military museums in Australia, the Army Museum Bandiana. Veterans are a proud, proud part of our community.

The Bandiana Military Area, which houses the Army Logistics Training Centre and Gaza Ridge Barracks, also spans some 670 hectares just outside of Wodonga. Colonel Matt Patching is the commandant of the Army logistics training centre there. Indi is full of active service personnel and members of the broader community committed to supporting and advocating for our veteran communities. Indeed, it was the Latchford Barracks in Wodonga that opened its doors last summer during the ‘black summer’ bushfires, providing a safe haven for families with nowhere to go. On January 6, in the middle of our darkest days, 160 people forced to evacuate their homes were welcomed at the Latchford Barracks.

The reforms in this bill make it clear that the nation sees our veterans and their families and recognises their immense contributions and unique challenges. It says, ‘We see you and we support you.’

The creation of a veteran family advocate position on the Repatriation Commission and the Military Rehabilitation and Compensation Commission recognises an often hidden segment of our veteran communities. Families of veterans see them in their quiet moments and understand their particular aspirations and their very real challenges. Veteran family members have their own stories to tell.

If you will indulge me, Mr Deputy Speaker, I want to draw on a few first-hand examples from my electorate that illustrate the communities that these reforms support on the ground.

Late last year, I heard from the tireless team of volunteers led by Mr Wayne Taylor at the Hume Veterans’ Information Centre based in Wodonga. This centre has been operational for over 20 years and has assisted 7500 veterans, war widows and widowers, other veteran dependants and carers during that time and has supported them in an array of needs. Many mental health issues, of course, as illustrated and talked about in the House today, are largely and greatly affected by PTSD, and we know our return service men and women suffer from this tremendously.

From January to October 2019 alone, the compensation advocates and welfare team at the centre dedicated 1600 volunteer hours and 13,000 kilometres on the road assisting veteran communities. That’s the equivalent of three trips on the road from Sydney to Perth. That’s a lot of driving!

The volunteers help support veterans prepare documents for the Department of Veterans’ Affairs and act as knowledgeable conduits for applications as their paperwork is assessed. These volunteers also provide invaluable advocacy support for spouses, families, and widows and widowers of veterans, as well as services ranging from hospital and aged-care visits to bereavement support, assistance with legal affairs and even home maintenance and gardening. These volunteers and the unwavering spirit of veteran communities in Indi hearten me. I was delighted to learn last year that the Hume Veterans’ Information Centre had received a $5 million grant to expand their contributions and establish a new veterans wellness centre in Wodonga, which will ensure these services for veterans and their families continue and that they do so in a modern state-of-the-art building.

The expansion of financial assistance to former ADF members to aid their transition to civilian work is another welcomed measure in this bill. These new measures, which include support with resume writing, job interview skills and navigating issues in the civilian workplace, which can be worlds apart from defence workplaces, will help veterans of working age to find fulfilling new roles.

Former ADF members have incredible skill sets from leadership, strategic planning and problem solving to advanced engineering, emergency management and medical qualifications. It’s important that we build strong bridges for former ADF members so that they can utilise these skills in civilian life and employment, if they wish to, and bring such skills and expertise to our community. This bill is another part of that bridge to civilian life.

Supporting defence personnel also means supporting their spouses and families. Defence families often move around the country to new locations where they have no roots, no supports, and no broader family members. Supporting their spouses to find meaningful employment is so important to making defence a viable career path for families, and that’s why I’m encouraging the government to consider a proposal developed by Business Wodonga for two schemes to enable defence spouses to find employment opportunities in Wodonga.

The first is a six-week program to accelerate social and professional networks for defence spouses to help them start businesses, find employment, upskill or tap into local networks. The second is an employment exchange program where newcomers to Albury-Wodonga could be skills matched to prospective employers even before arriving in town. Supporting worthy programs like this is crucial to making defence a viable career pathway. I implore the government to consider such programs, especially in these difficult times where people are seeking work.

While it’s important we provide assistance to former ADF members in their transition to civilian life and employment, it’s also really important that we ensure ADF members receive the appropriate superannuation benefits and other entitlements accrued during their service as they enter into civilian life. I note, for example, that veteran communities in my electorate welcomed the defence bill this parliament passed in May, which enables former ADF members to continue to make contributions to their ADF super accounts and extends access to the Defence Home Ownership Assistance Scheme for up to five years.

There are tireless advocates for these types of reforms. I note in particular the work of former Lieutenant Colonel Jim Hislop OAM, who was recently awarded a Queen’s birthday honour for his service to veterans’ communities, and his colleague Mr Herb Ellerbock, former Warrant Officer Class 1. These gentlemen have briefed me about the concerns they and veterans they represent have had with the administration of the Defence Force Retirement and Death Benefit Scheme. As an independent, it is my privilege to represent the interests of everyone in my electorate. To this end, I support their advocacy in this place. It’s so important to ensure veterans transition well into civilian life and that their service and entitlements are truly honoured. There are countless other examples of service and altruism I could have given today from the veteran community in my electorate, but I won’t go into all of those.

I want to say finally that this is a good bill. It keeps those communities of our veterans front of mind. I’m very pleased to support it. I commend this bill to the House.