I’d like to make a brief statement to support this Treasury Laws Amendment (2019-20 Bushfire Tax Assistance) Bill 2020, and to underscore the critical importance of delivering support to individuals, primary producers and small businesses in bushfire-affected regions.

The support that the government has announced to date, part of which is contained in this bill, is extremely welcome. But as we shift from response to recovery we need constantly to interrogate whether the support that is offered is right and whether it is enough. Both of these questions are important, and to see why that is we need to look no further than Murrindindi Shire in the south of my electorate of Indi.

The recovery process after Black Saturday involved some things that were effective but others that were not enough or were not right for the community.

On the one hand, we saw construction of white-elephant infrastructure that was neither asked for nor appropriate for the community’s needs. ‘Stadiums belong in Melbourne,’ one constituent told me. ‘We didn’t ask for that stadium. It’s under-utilised and now our rates are going towards its upkeep.’

Local government representatives have told me that public buildings were hastily constructed and of poor quality and have led to expensive long-term maintenance by councils that have insufficient funds to maintain them. On the other hand, many issues that should have been addressed properly received insufficient or unsystematic attention.

We know that mental health impacts of Black Saturday are still prevalent 10 years on, and we know that parts of the shire of Murrindindi still struggle with a lack of jobs as businesses have struggled to establish, let alone new ones to develop.

As we move forward, though, we must have a community-led and community-centric approach to reconstruction, one which delivers enough support and the right kind of support. I’m really encouraged by a meeting I had last week with Mr Andrew Colvin, co-ordinator of the new National Bushfire Recovery Agency, who was very clear in his conversation with me that community consultation was his top priority. I look forward to working with him over the months and years ahead.

Today, I’d like to share some further details of people who have been impacted, to ensure that their stories and needs remain in the centre of this discussion and in the centre of legislation that’s drafted in his place to support them.

In my condolence speech yesterday, I mentioned stories of the impact of fire on people in Indi, the stories of Cindy Penny, who lost most of her cattle near Bandiana, of Sharan and Jay Rivett, whose pumpkin farm was left devastated after three weeks of forced evacuation and a poisoned water supply, and of Stef Antonello, whose vineyard is looking at a 100 per cent loss of crop due to smoke taint. There are many other stories like this.

Rob Hawkings runs a large local grape farm and winery that’s been hit by a smoke taint. Rob will also lose 100 tonnes of fruit that would have sold for $800,000 if it were not for these fires. As a winemaker, that hundred tonnes of fruit he will lose means lost income of $1.3 million worth of wine that will never be made—never be sold. Usually, this week would herald the start of the vintage, where he’d inject $150,000 into the local economy through labour to pick the grapes. None of that will happen this year and that casual workforce will not be spending money in the town, and so the trickle-on effect continues.

The support that the government has provided so far is good and it’s welcome. But we need to ask, ‘Is it enough to sustain businesses like Rob’s that will lose far more than they will get back in support?’ And if it’s not, what can we do to ensure our regional economies survive, not just in the immediate aftermath, but in the longer term?

Dianne Gibbons runs Bella’s Cafe in Harrietville. She usually takes $700 a day. When she called my office a few weeks ago on a day that was supposed to be in the busiest week of the year she’d just taken $7. Steph Mannix, who runs the Beechworth on Bridge Motel, has seen all her bookings cancelled. She called me in late January, frustrated that support for small business had been announced but was not yet accessible, and that Beechworth sat outside the zone of Australian Taxation Office deferrals. Fiona Goldman runs High Country Horses in Mansfield. It runs multi-day horse rides into the mountains around the Howqua Hills and Mount Buller. She’s cancelled weeks of rides, and even now that the parks have re-opened people are very slow to come back. Over the Australia Day weekend, usually one of the busiest of the year, they had but four visitors.

In our Alpine Shire we’ve lost 2000 hectares of hardwood plantation, meaning a shortage for local timber mills. In Myrtleford, 22 per cent of the workforce is employed in the timber industry. These people will be affected in four to eight years’ time, when this shortage starts to hit. We need to plan for them, too.

I spoke to the owner of a restaurant in Tawonga. She employs five staff. On January 1, during the dinner service, she received a text. It was an evacuation order for the Kiewa Valley. The next day, Alpine Shire was declared one of the local governments in a state of disaster. Since then that business has been shut. All bookings for January and February have been cancelled. The owner left a fridge full of stock that’s gone off and she told me that she’d have to sell her vehicle and re-draw on her mortgage in order to pay her bills. ‘I’ve been putting in 100 per cent to build my business,’ she told me, ‘and I’ve worked too hard to go under.’

Likewise, I spoke to the owner of the caravan park in Bright, which employs 24 staff. Usually at this time he is at 95 per cent capacity. Today they’re at five per cent. A local bread company near Wangaratta has seen trade fall by 90 per cent. They employ 30 people. The owner told me: ‘If we don’t have the turnover to pay wages at the end of the week I’ll have no income to pay loans and living costs.’ For each of these businesses, and for the people receiving the disaster relief payment, the provisions of this bill will mean more money straight into their pockets. So I welcome this and I congratulate the government on this move. But we must do more, and in every step we take we must centre the stories of the people affected to ensure they get the support that they need.

In that spirit, there are four things I’ve heard from my community that I’m calling on the government to do.

First, we must continue systematically to engage affected small businesses and primary producers to identify whether the support provided is enough to sustain them. If it’s not, the government will have to decide what price it’s willing to pay to save these regional economies.

Second, I’ve talked today about the grapegrowers in the Alpine valleys facing thousands of tonnes of fruit lost, and I’ve been working with some of my local grapegrowers on proposals to take to government about possible support packages. Unfortunately, we’re currently without an agriculture minister. But when one is appointed, the new minister must urgently look at support for the grape industry, nationally. I stand ready to engage with them.

Third, the ATO has allowed affected businesses to defer their tax payments to the end of May. This provides life support to small businesses in the form of a rapid cash injection, and many of my constituents are thrilled to receive this extension. However, this allowance is only available to individuals in eligible postcodes and this list of postcodes does not cover all those areas where small businesses have faced near-complete loss of income. I have fielded many, many calls from businesses that are desperate for this assistance and cannot access it. I believe the ATO allowances should be expanded to all affected businesses, and I call on the government to review this list of postcodes.

Finally, I’m calling on the government to update its payments to affected individuals. The disaster recovery payment—a non-means tested transfer to affected individuals of $1,000 for adults and $400 for children, has not been updated since 2006. This means the value of this payment has fallen in real terms. I believe this level is no longer adequate. I’m calling on the government to lift the default rate of the recovery payment to $3,000 for adults and $1,000 for children.

Similarly, the disaster recovery allowance to support individuals who have lost income as a result of natural disaster is limited to 13 weeks. This may have made sense once upon a time when fires were a sudden event. But in our changed climate, where in some parts of the country the fires have been raging for months already and show no signs of slowing, I believe this is no longer adequate. I am calling the government to lift the cap on the allowance from 13 weeks to 26 weeks to enable individuals who are without income for long periods of time to continue to have the support they need.

I have already drafted legislation to give effect to these changes. However, of course, as a private member, I am not able to introduce them to the House, so today I’ll be in touch and send a copy of my draft bill to the Minister for Social Services and the Minister for Natural Disaster and Emergency Management, inviting them to support such a bill by introducing it to the House.

Like many MPs, I’ve heard too many stories of individuals who are scared of being left out in the cold in the wake of this crisis, so this week many have called for co-operation and unity. It is in this spirit that I offer these proposals to government and I look forward to working with them so that together we can support our bushfire-affected and impacted communities. 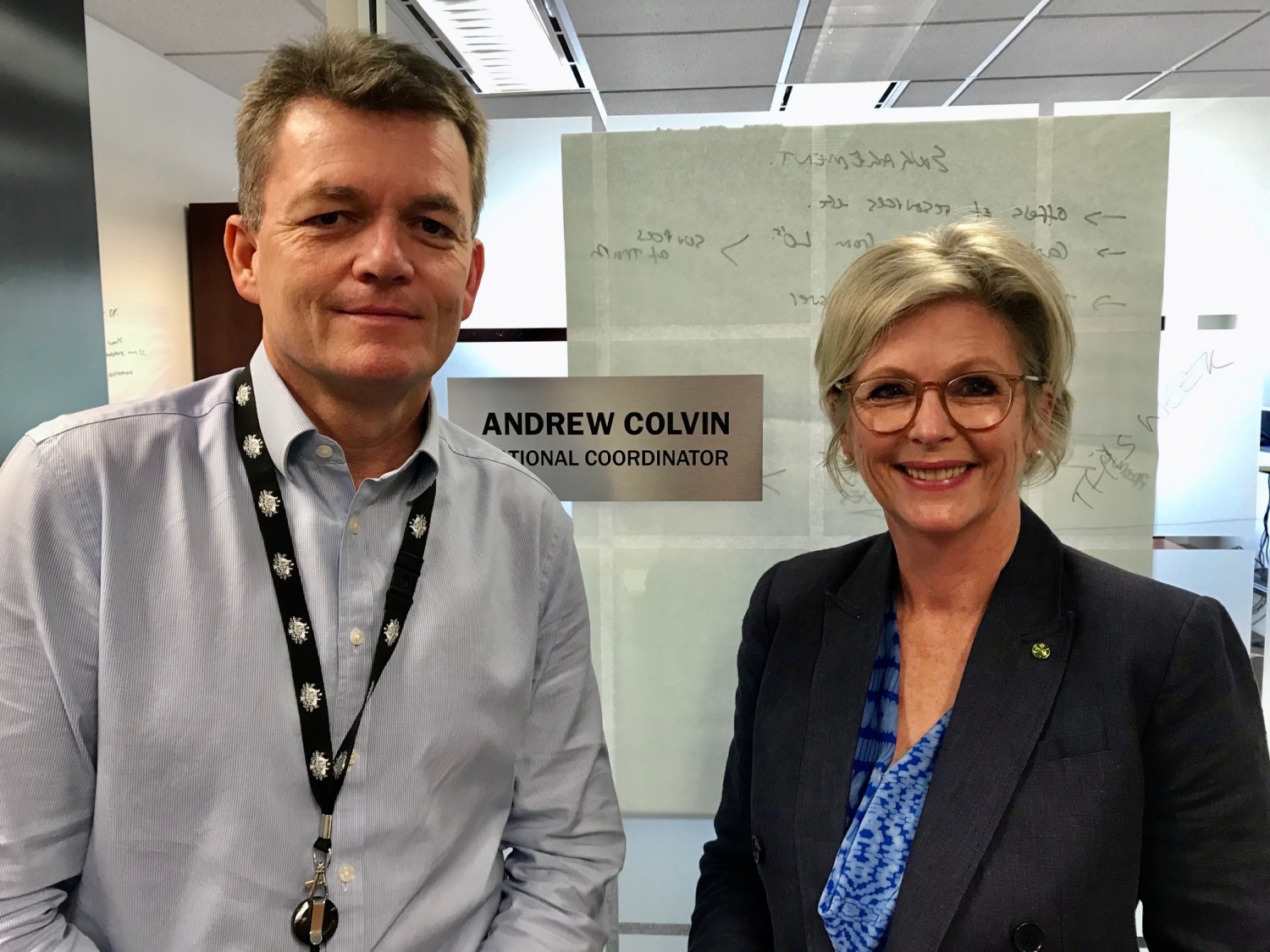 Bushfires should forge our resolve