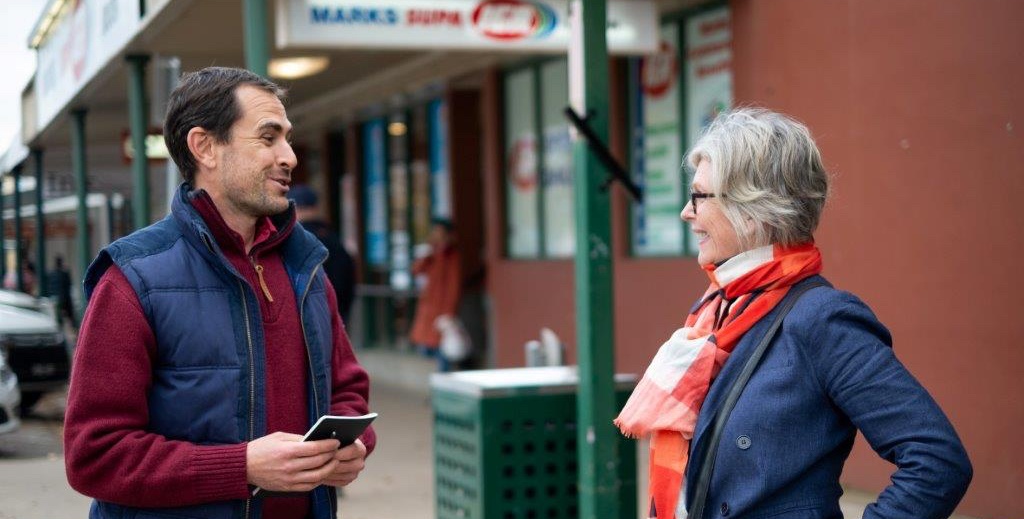 RECOVERY: With Mansfield District Chamber of Commerce president John Lavarov on May 27 talking about bushfire and COVID impacts on commerce.

The Independent Federal Member for Indi, who yesterday was told by the National Bushfire Recovery Agency of the ‘large delay’ in deciding the extension, said the grant was crucial for small business beyond the immediate fire-front.

“It will be a great relief for our small businesses,” Dr Haines said.

The grant can be used for salaries, wages, utilities and rent costs, business development through marketing and communications, and financial advice.

“Businesses in Towong and Alpine shires, directly affected by the Black Summer bushfire emergency, have been eligible to apply for this essential small business grant since mid-March,” Dr Haines said.

“But the Commonwealth has required the Victorian government’s agreement to co-fund the extension of eligibility beyond the fire fronts to other local government areas where the economic impact of the Upper Murray and Alpine Valleys fires has been so serious,” Dr Haines said.

“This co-funding decision has been announced today.”

Dr Haines said the exclusion by the Commonwealth and Victorian governments of Indigo, Mansfield and Wangaratta business from eligibility – communities experiencing the devastating loss of tourism and hospitality income, in particular – was a decision that was clearly wrong and had to be changed.

“It was always clear to those of us on the ground that the fires’ impacts would stretch well beyond the places directly affected by flames,” she said.

“I heard from business owners in Indigo, Mansfield and Wangaratta that the only way the impact could have been worse is if their businesses had actually burned down.

“No financial assistance for these businesses has been available.”

Dr Haines said the grant would not replace lost income, but it would alleviate some of the significant losses being worn by businesses impacted by these bushfires.

“I have been in regular contact with local councils across Indi about the impact of the bushfires and lobbying constantly for these grants to be extended,” she said.

“I have spoken in Parliament, written to Victoria’s Emergency Services Minister Lisa Neville, raised our concerns with the Deputy Prime Minister, delivered a report on small business in Indi to the Treasurer, and hosted roundtables for local businesses to directly lobby the head of the National Bushfire Recovery Agency and for the plantation timber industry to speak with the deputy coordinator.

“When I hosted Agency national coordinator Andrew Colvin in April, we had local breweries and tourism businesses directly making the case that excluding them from the grants caused confusion and stress, and that these grants would go a long way to helping them in recovery.

Dr Haines said the scale of the fires’ impact had been revealed in economic modelling commissioned by Tourism North East which showed revenue losses of $158 million to $208 million in the March quarter, directly after the fires. This was before COVID-19 started.

The Independent MP also  wants the Federal Government to include Mansfield and Wangaratta in Local Economic Recovery Plans (LERP) which would direct how funds from the $448.5m Regional Bushfire Recovery and Development Program would be spent locally.

“It makes no sense to recognise the economic impact through these small business grants but to exclude them from the LERPs. The Federal Government must be consistent. We can’t leave these communities behind,” Dr Haines said.

The federal government has allocated $362 million to demand-driven bushfire recovery programs but has so far spent just $219m.

“I am calling on the government to guarantee that all of the allocation – including the $143m not yet spent – will be spent on bushfire recovery as it committed,” she said.

“If there is a genuine underspend in a designated program area then this money should go to the Local Economic Recovery Plans, so our local communities can decide how to spend it. The government could make that commitment today.”